There’s a New Year’s tradition downeast, wherein people hike Cadillac Mountain In Acadia National Park on New Year’s eve to see the sun rise. It is the first place in the United States the morning sun touches from November to March. Sunrise here is late but not that late. We would have had to hike at 0500 or so. We chose to see the sun drenched mountain at noon instead.

We started up a path, which looked interesting, but encountered sheer ice right away. Tim acquiesced to my fears and we turned around and walked the road to the summit instead. I don’t like ice under my feet and there wasn’t enough of it to be managed with micro spikes.

This was the view of ice we saw from the road. I could get spoiled walking in National Parks, so well maintained. There was a trail around the summit that even enabled handicapped access.

After my trip back home, Tim whisked me as far east as we could go while remaining in the United States, to Lubec, Maine and the West Quoddy Lighthouse. This has to be one of the most photogenic lighthouses if only for its red stripes. We stayed in a small cottage, where the wind shook the house but never made it inside.

On our drive to the lighthouse, we stopped and walked in a wildlife preserve, where I once again turned back after we found patches of black ice. Tim found it the hard way, he slipped and fell, but didn’t make much of it. After we got to our cabin, his wrist swelled (this wrist has about $7,000 of hardware in it from a meeting with the ice in 2018) and the next day he went to the local emergency room. He hadn’t brought our insurance cards with him so we found the numbers and drew them on a piece of cardboard. It worked.

Turns out, he has a small avulsed fracture, a piece of one of the many wrist bones has broken off. It was much less painful than the first fracture and he has full range of motion. He’s off to a specialist on Wednesday and already communicated with his surgeon back home. But he didn’t let it interfere. We hiked all around West Quoddy Head with our micro spikes and a good time was had by all.

Red paint goes a long way in these parts.

So cute from any angle.

5 thoughts on “I like my ice in a glass” 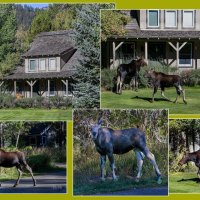