We traveled for 20 hours on Wednesday and are gradually recovering from jet leg.   Spring is just on the brink of arriving. A strong storm blow through yesterday, with wind, thunder and lightning.  Our Davis Weather Station reported the highest wind since we’ve lived here: 42 mph. Lots of power outages. 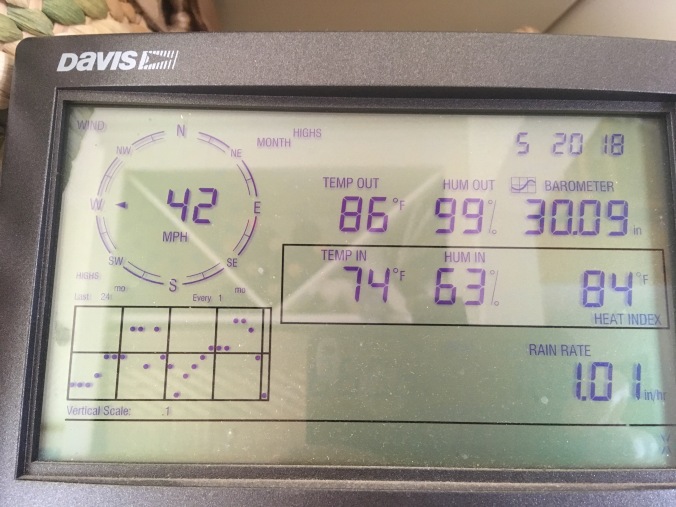 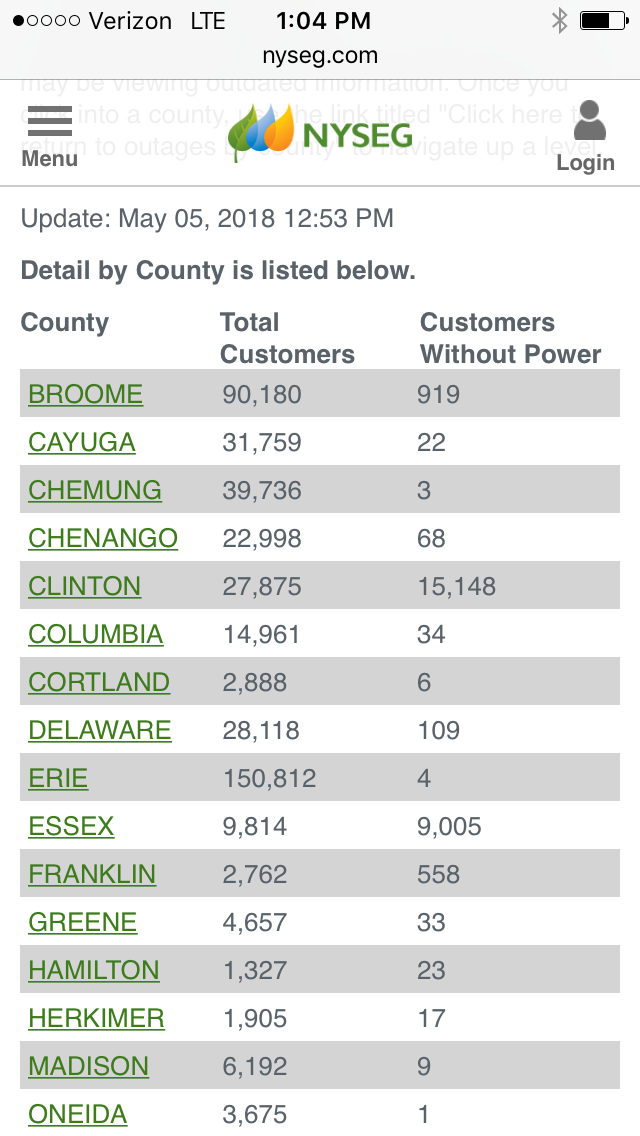 Our county is the one where hardly anyone has power. I was happy to use my Coleman lantern and candles last night, while we read and knit. This is the Forest Path stole I began the plane to Ireland. It’s too complicated to put down and I’ll keep knitting it. At the airport security check, they asked me if I had knitting needles in my bag.  I said I did, with two weeks worth of knitting that they could not have. They laughed, confirmed I had knitting needles and let me pass. 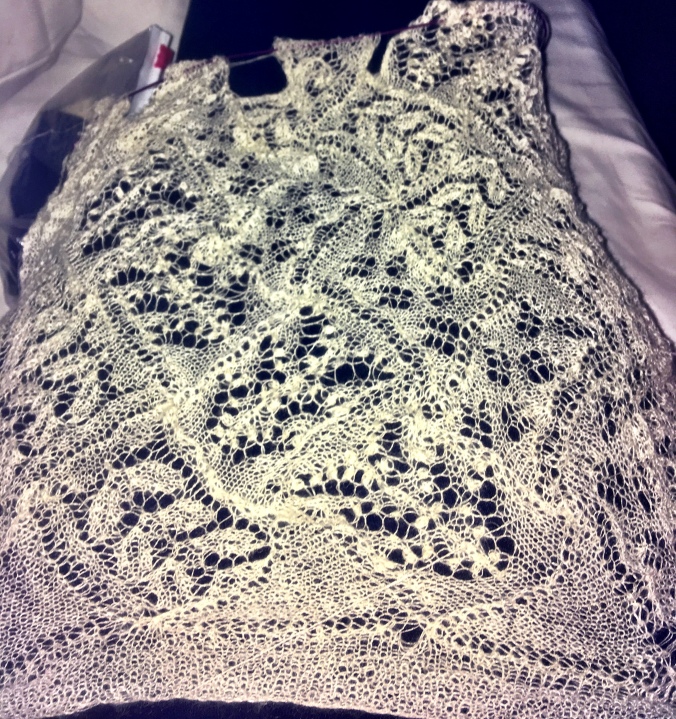 We set up the generator and all is well.   Today is glorious and sunny.  Lots of birds singing,. and the woodpeckers are hammering away.  It was a long winter indoors. What I love most about our travel and caretaking lifestyle is the opportunity to spend long stretches outdoors.

But Tim needed his headlamp to play the piano today. 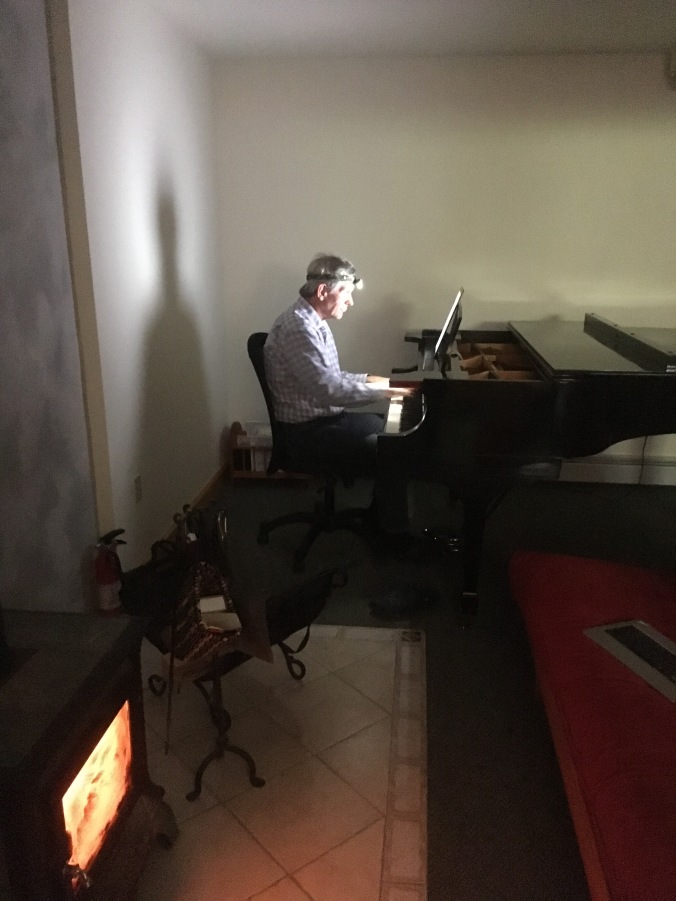 And apparently we’re having company! 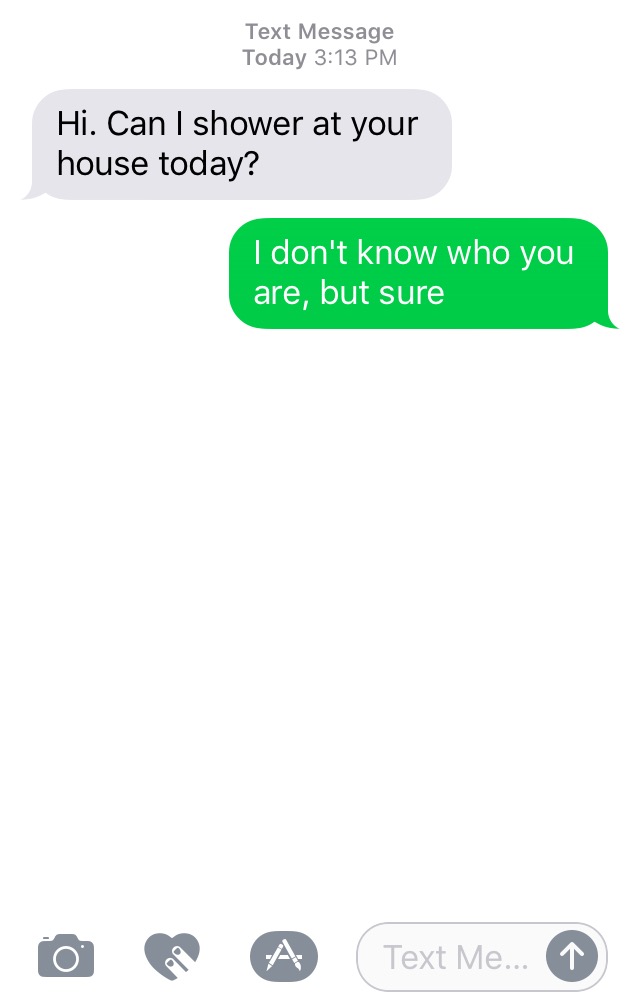 Or as Tim likes to say, you can call me Shirley, just don’t call me chubsy-ubsy.  She was a member of the family for 18 years, really a lifetime, as evidenced by how my kids have grown since she arrived.

She outlived many companions.  Her sister, Oreo, was lost in the woods years ago.

She survived an encounter with a moving car,in the 1990’s, with perhaps a little loss of mental capacity but as the vet said, “It’s not like she has to go to work. She just has to find her food and litter box”.  And she did.

She (and her adopted brother, Loki) lived aboard our catamaran and held up in all weather conditions. When the weather was bad, they crawled into their bunk and slept.  At night, we would hear them scurrying along the deck and waited for the dreaded splash.  It never happened.

Shirley on watch on Water Lily

Both cats traveled with us to several lighthouse caretaking gigs, until Loki resisted travel.

Shirley and Loki on Seguin

She loved all sorts of knitwear and projects and was a frequent model.

She enjoyed a drink now and then, bird watching and squirrel hunting.

And relaxing in front of the fireplace.

She purred until the end,  lying on one of her favorite scarves.  She’s been my companion, child surrogate,  travel buddy, knitwear tester and will be sorely missed. 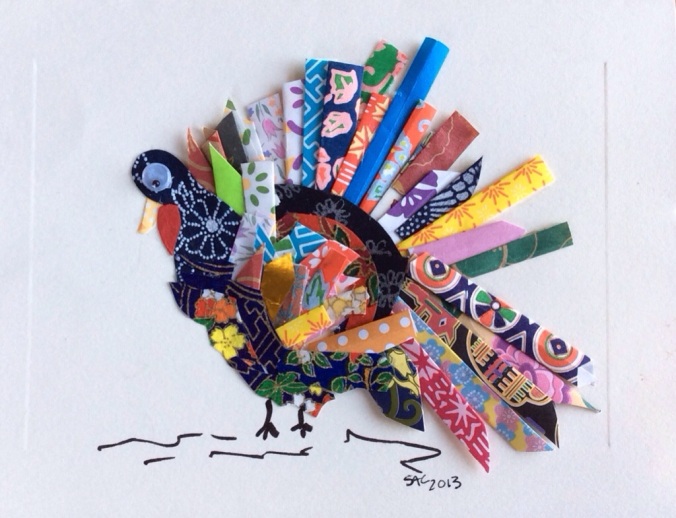 I am thankful for my children, my loving husband, my fine and talented friends, like Susan who made this card, and that today, my name isn’t Tom.

I hold the latest technology in my lap. I broke down and bought an iPad Air. I nursed along my Apple iBook for eight years. At this point, it’s merely a repository for my photos, all of which are backed up on an external hard drive, CD’s and now Scandisks. It no longer can surf the internet because it’s been outdated.

Last night I looked through my friend’s telescope and clearly saw the moon’s craters and mountains. The night was clear, crisp and below freezing! I had to go inside to thaw my fingers and deferred looking at Jupiter for another night.

My son is downsizing and I am now the proud owner of my Dad’s accordion from the 1930’s. He played it through high school and college to earn money and would briefly bring it out and play a few songs at family gatherings. The last time it was played (can’t say it made music) was at my wedding seven years ago, when it took two inebriated souls to squeeze the bellows, push the buttons and play the notes. Now it’s my turn. So far, not so good. It has to be played by feel because it’s so large, my chin gets pushed up, over the top. But it’s a mobile, off the grid sort of instrument

And then there’s fiber. I put my daughter’s sweater aside to whip up a wee one. Here it is sans button and matching hat. Cute! 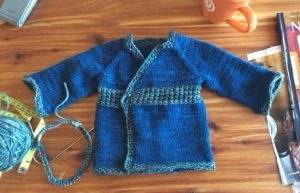 Work! I have to confess I complained a little to Tim about all this travel and packing. We’ve been home from Alaska for 6 weeks and during that time, I’ve taken 4 trips, all of which required some degree of planning. And here we go again.

I had a chance to discuss my fiber planning and travels with Kelley Petkun on the Knitpicks podcast last week. You can find the episode here

This weekend, I’m getting ready to head to Seguin Island again. 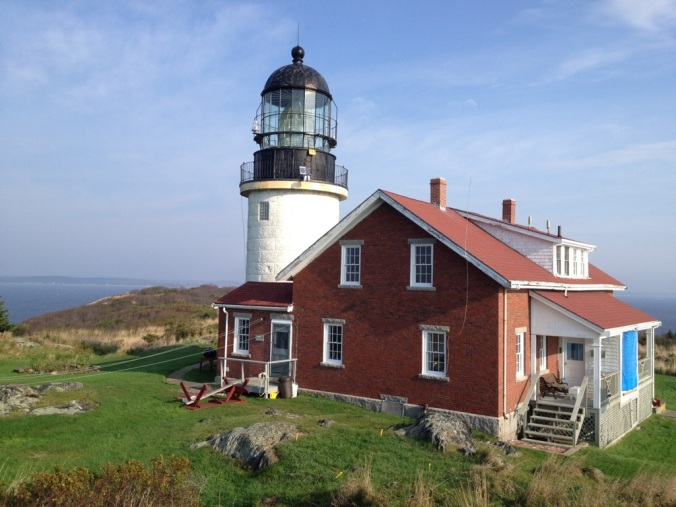 Friends stay at our house and watch the cats, which is great, but I have to get the house ready. The fridge is almost empty, a little prematurely. 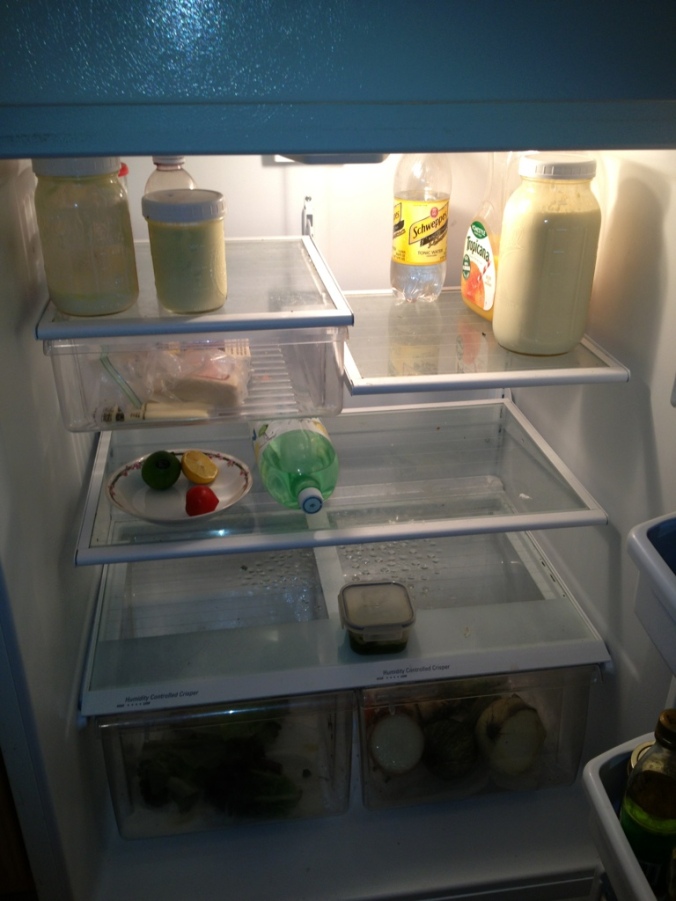 We’ve taken our last sail on Boreas for the season. 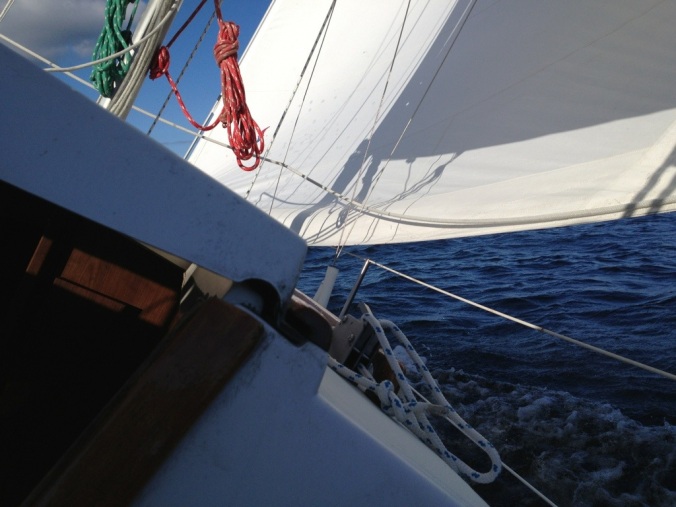 I’ve been trying to spin an hour a day. Here is some alpaca fiber I am spinning straight from the locks. 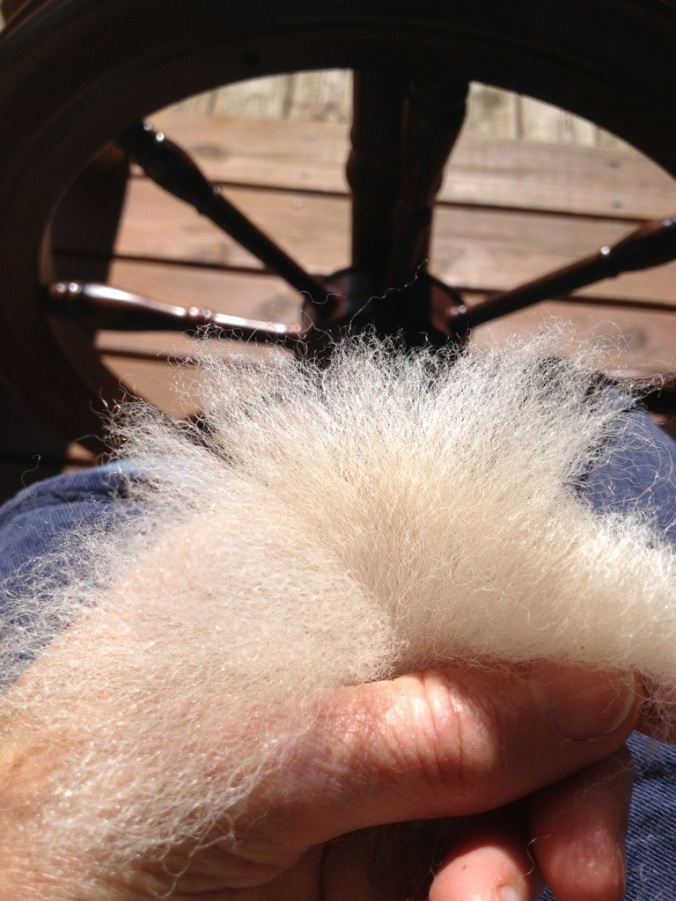 Yesterday, I wound several skeins of my handspun, wool-mohair blend for socks and kool aid dyed corriedale for a child’s hat. 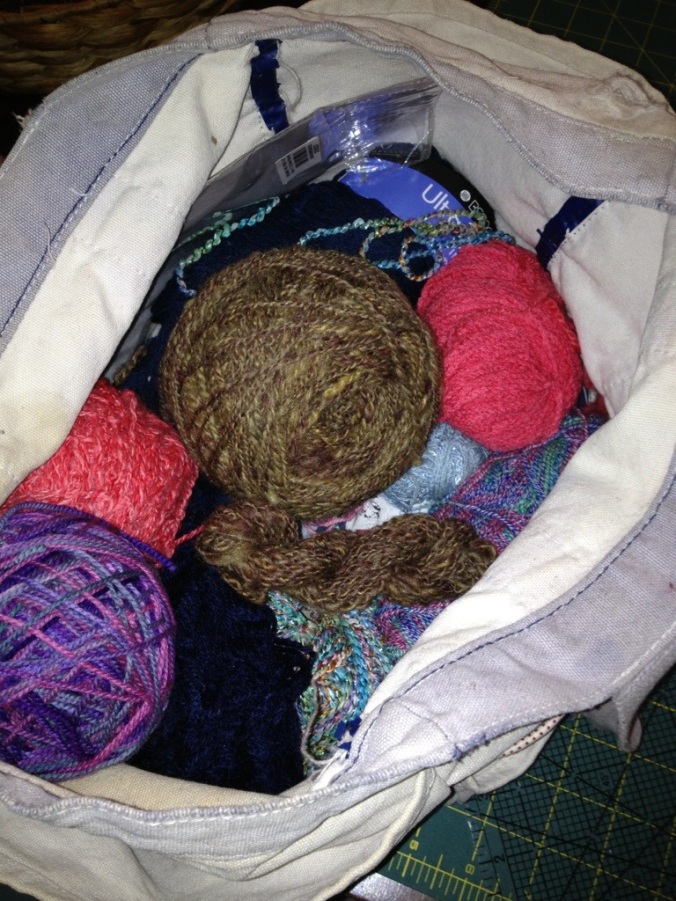 My clothes are packed, I’ll spend some time working on projects I am leaving behind today and, oh yes, plan our food. Tomorrow I take a vacation from vacation before my next vacation. 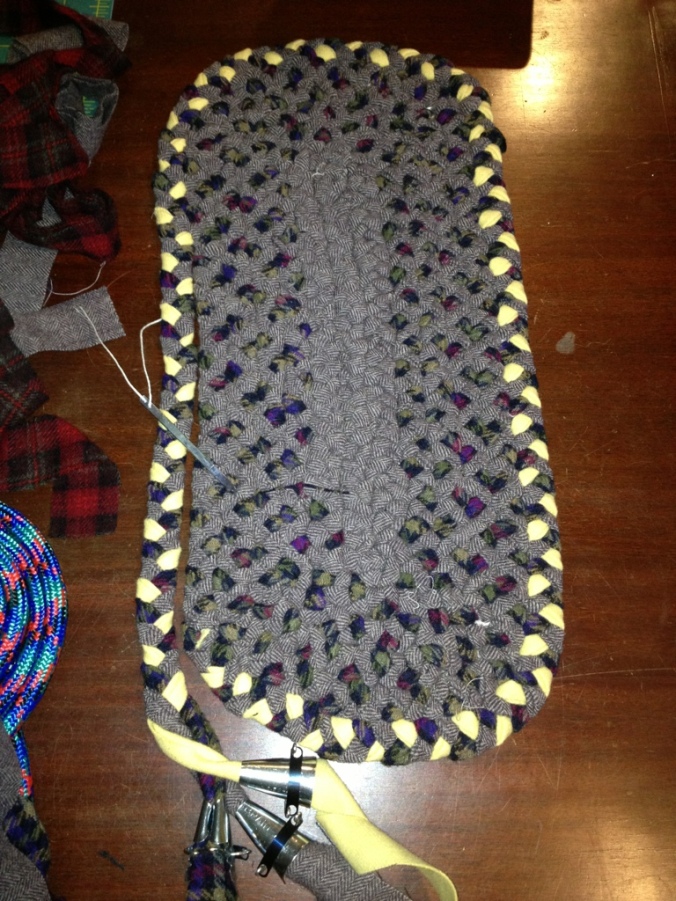 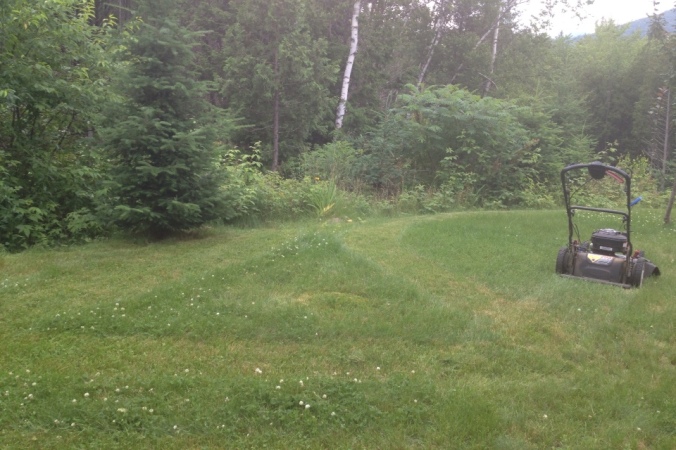 I realized it as I mowed yesterday before we receive another four inches of rain on top of an already soggy summer. Mowing is just like machine quilting where you seek a path, which covers the area, avoids obstacles and looks pleasing.

I didn’t understand this at first. During our first caretaker position on Seguin I remember Tim telling me to mow the lawn in U’s. Head out, make a turn and leave space between the first row which you then mow on the return trip. This sets up a pattern for alternating rows. The grass lies in stripes of opposite directions. I thought he was nuts. Five years later I get it.

My mind is filled with quilting and patterns as I machine quilt my son’s Long Trail quilt. 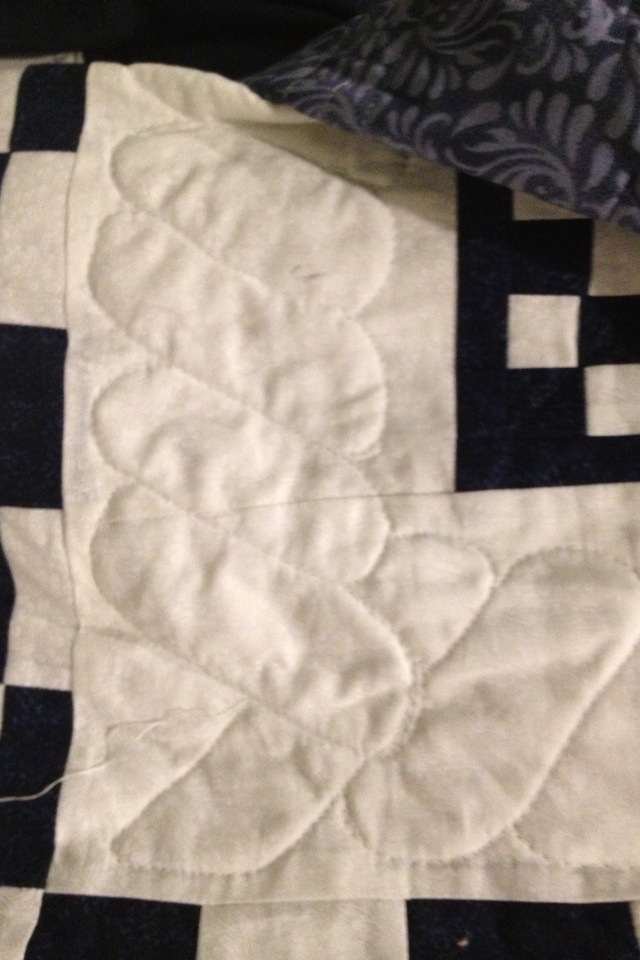 My little Singer Featherweight is humming along on this king size quilt. I only need to quilt the outer border and nine central motifs. I am following Leah Day’s advice for free motion quilting. I’ve modified a darning foot so it doesn’t hop up and down; my feeder dogs remain up; and my stitch length is the shortest possible. I’ve had the least tension problems I can remember.

I did however almost set the quilt on fire when the little tiny lightbulb scorched the backing. I’ll need to add a patch over it.

Back to mowing. Once I established a pleasing pattern, I was undecided if I wanted to finish the job or leave the pleasing patterns – knowing it will rain too hard the next several days to do anything about it. Tim would love it! 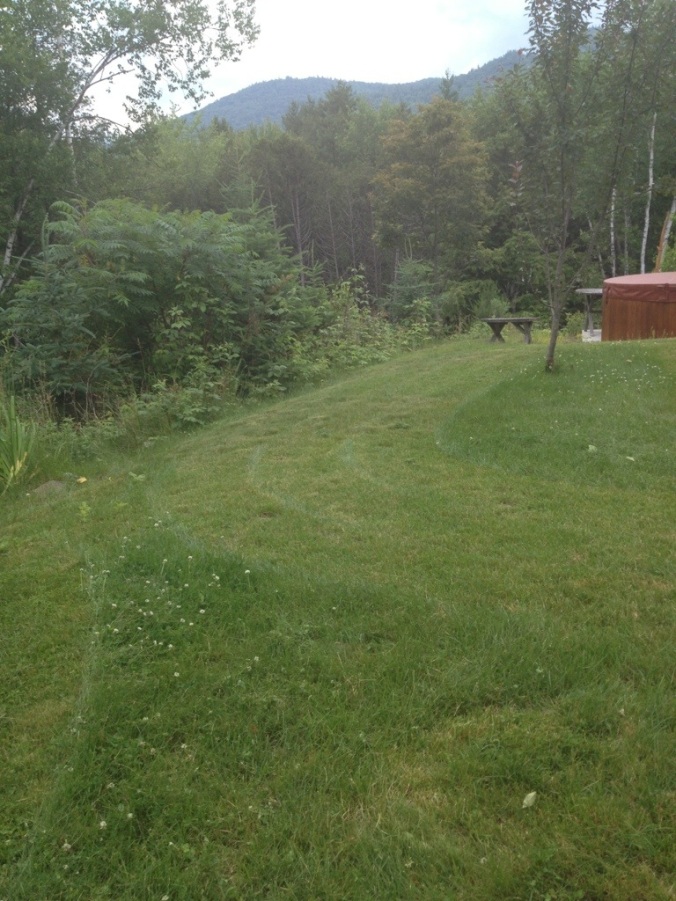 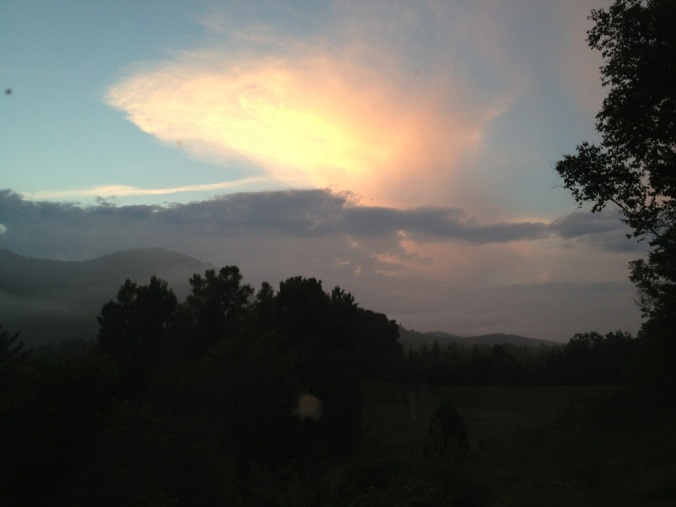 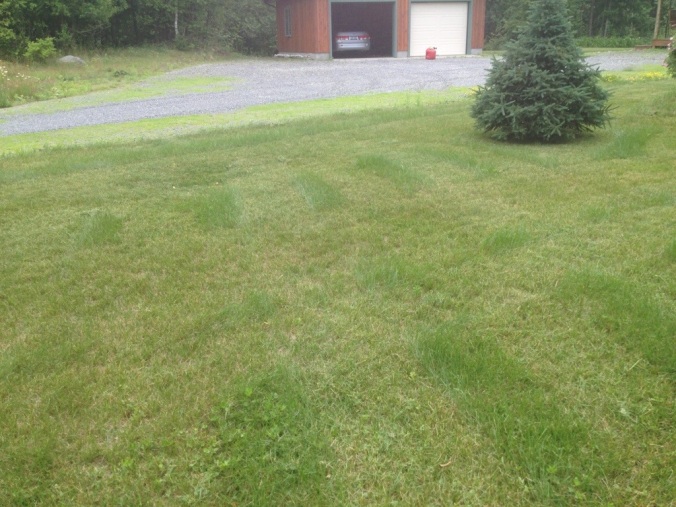 It’s very colorful, weighs three pounds and breaks down into segments for travel. Just what I need on a tiny island. 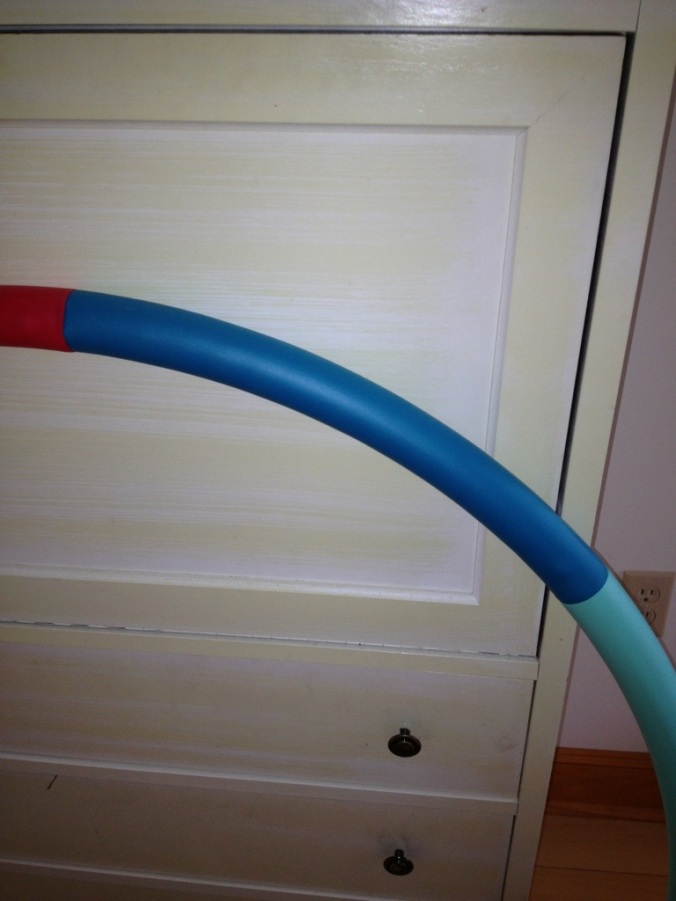 Apparently, hula hooping is the latest craze. This isn’t your lightweight Whamo version. It’s hefty and promises bruising the first couple of weeks. The instructions recommend limiting hooping to one to three minutes daily, initially. My friend told me about it, my librarian is already doing it and others know about it. Must get out of my vacuum.

This morning, I heard a new bird song outside the bedroom and was trying to find it on my Audobon birding app. I couldn’t identify the call but I attracted a cheeky, little American Goldfinch to the window. 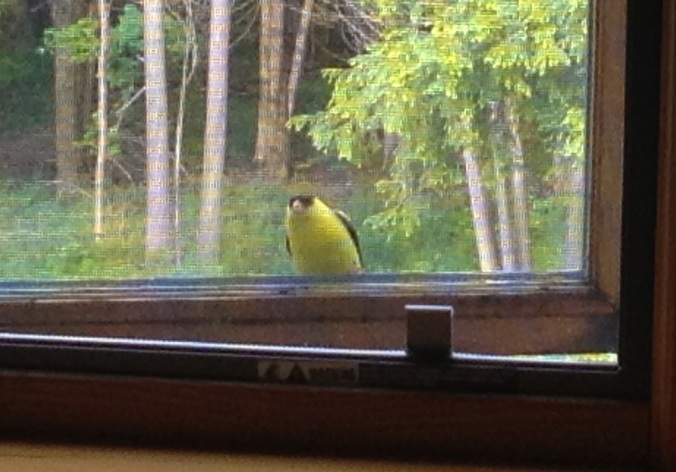 Travel time. I arrived in Washington, DC to have a staycation (for her) with my daughter and help her out after oral surgery. 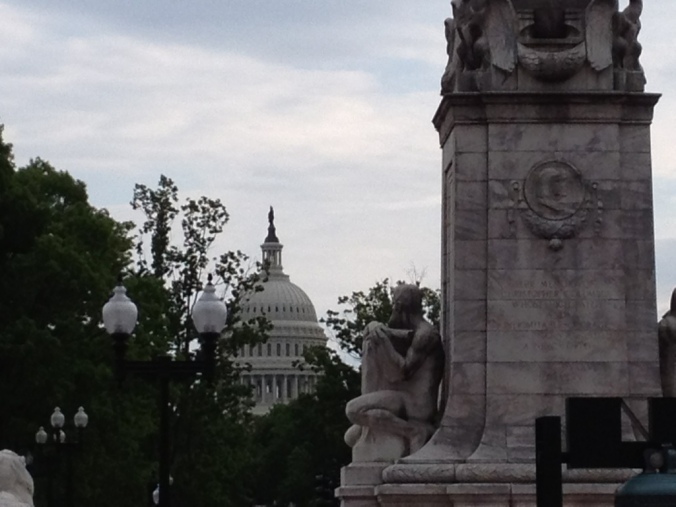 I made myself at home in her beautiful apartment and tried to make a cup of coffee while she slept in. I finally found a coffee maker but no coffee. So I opted for a cup of tea instead. There was plenty of tea, hot water, milk and sugar. I had to look hard among all the bar ware to find a mug though. I spotted martini glasses, champagne flutes, beer glasses and a shaker. 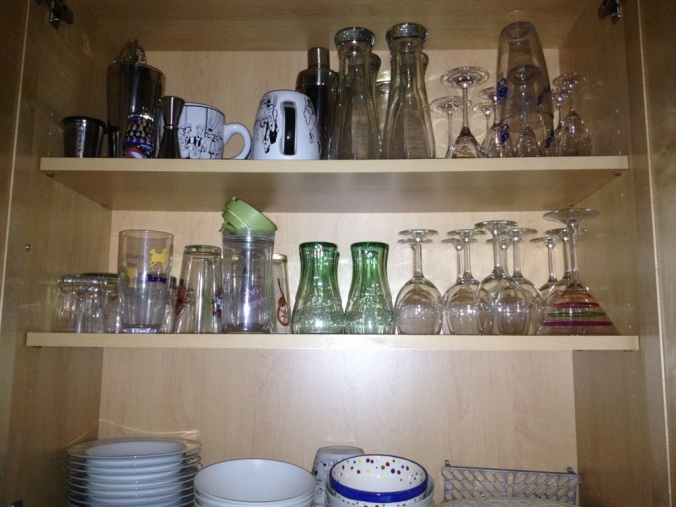 Ice packs were stored among several bottles of liquor in the freezer. I did spot a package of frozen peas in there too, if needed in a pinch. 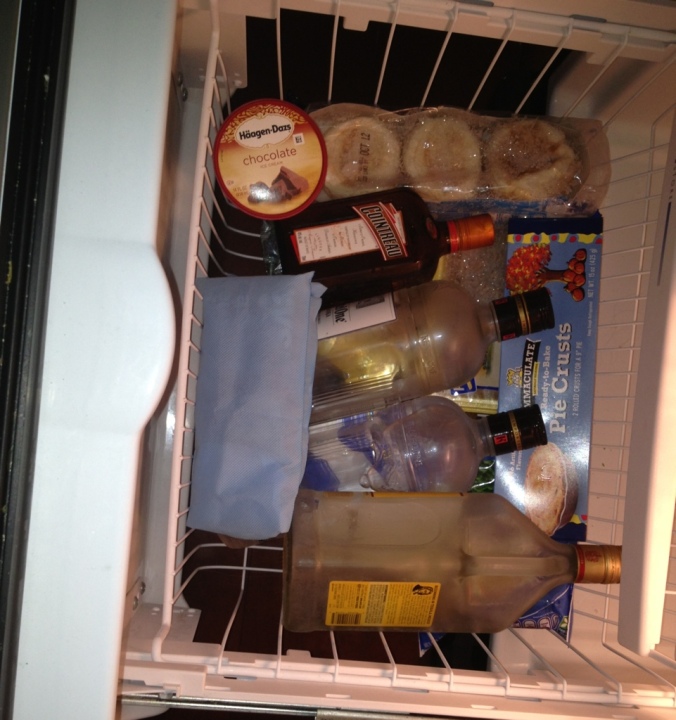 Post op, I visited my favorite DC yarn shop, Looped Yarn Works, and bought some lovely yarn to crochet boot toppers for the long DC summer. These were super quick and will just peak over the top of work boots. 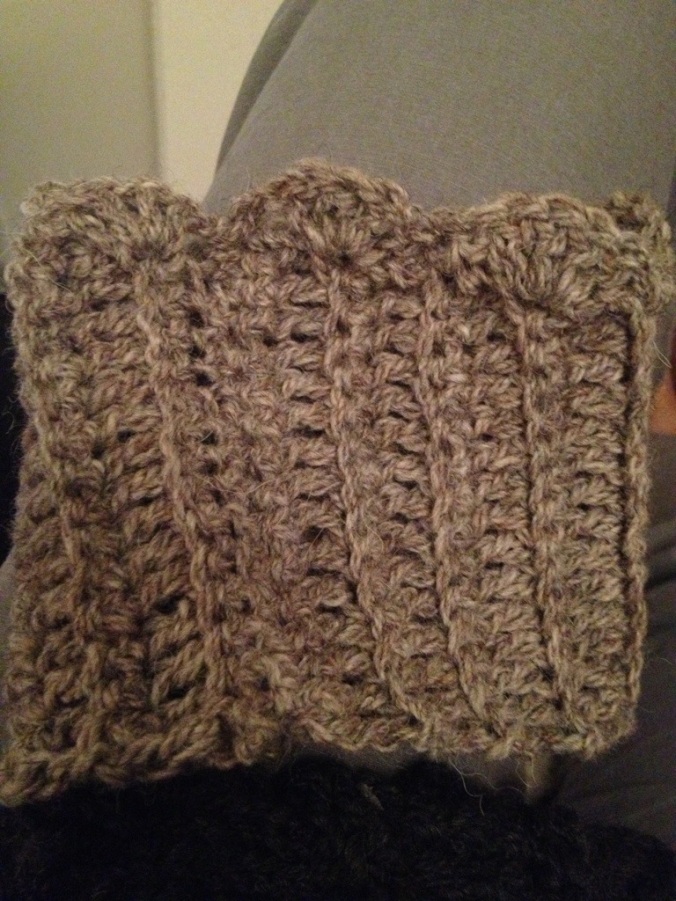 I benefitted from the generosity of family and friends and helped eat the ice cream she received while we watched scary TV, The Following, and Romantic Comedies. Bittersweet. 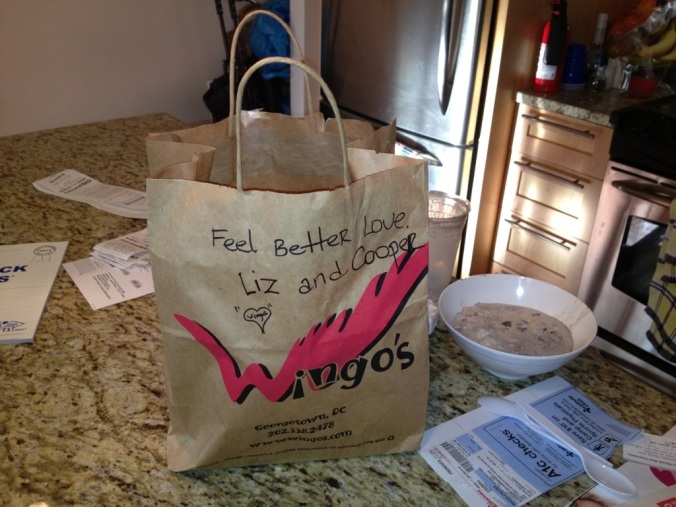 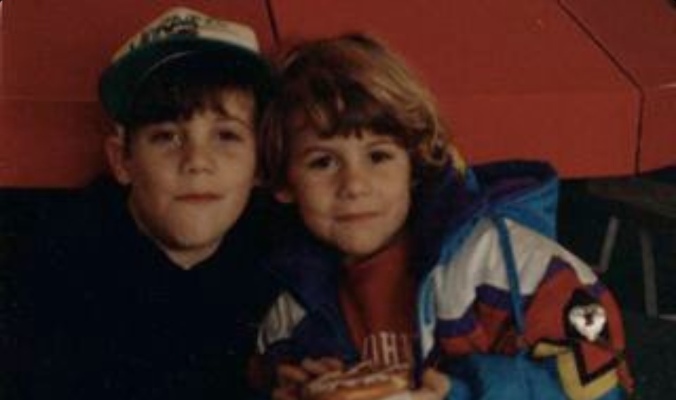 When my kids were little and people asked how they were, I usually quipped they weren’t involved in drugs or other teenage associated shenanigans.

Now that they are young adults, and make me proud every day, I am happy to report they sleep through the night and are potty trained. 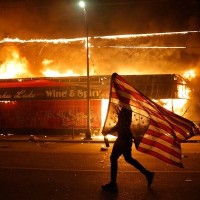