Human and others. Fall migration has begun. Seguin Island is loaded with Northern Flickers. They are kind of bashful and elude my camera. Here is one sitting on the sunset bench. 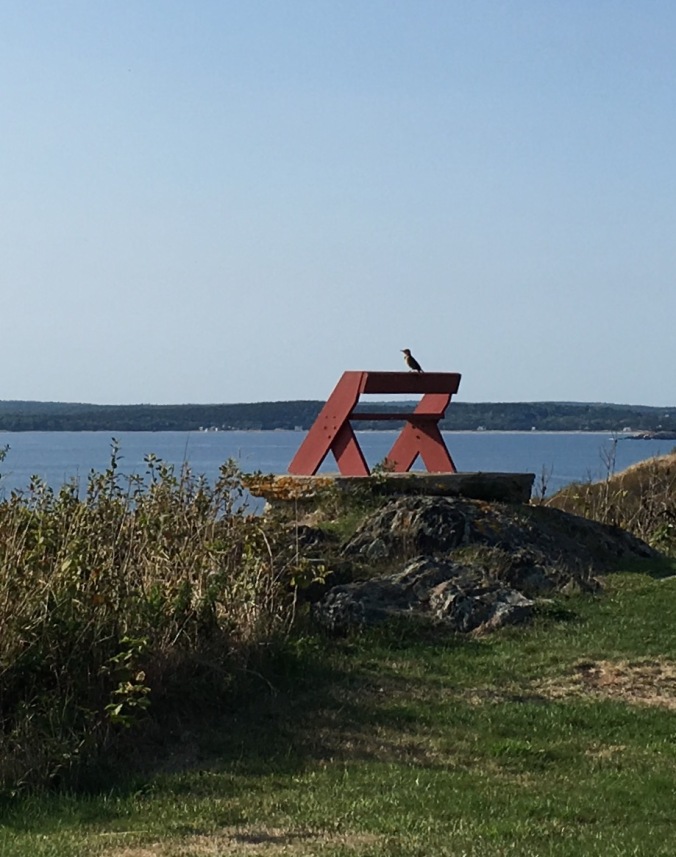 Monarch butterflies are starting to flutter through. I spotted a mink and my siting was confirmed by 3 young men in the know. Apparently it caught its own ferry here,  log, big wave? Some other critter nibbled on my bag of flax meal. The island has been without mice or rodents but at night, once the light is out, the kitchen fills with crickets. I had to go back in and turn on the light last night and had to dodge at least 15 crickets on the floor. Tim insists they ate my flax.  Hmmm.

Fair weather has also brought visitors and it is a delight to share this magical place with others. It brings joy to all who see it, especially us.

The bathtubs are shining by Seguin standards but you might dispute it if I posted a photo so just imagine pristine tubs. Being the good lighthouse keeper’s wife, I also deep, deep cleaned the refrigerator. On Tasmania, I took unusual pleasure in using the old floor waxer to polish up the linoleum.

Sunrise and sunset keeps happening. The sun is setting 18 minutes earlier than when we arrived 2 weeks ago. I can’t speak to the sunrise but I have caught it on at least a couple of occasions. Yesterday was one. 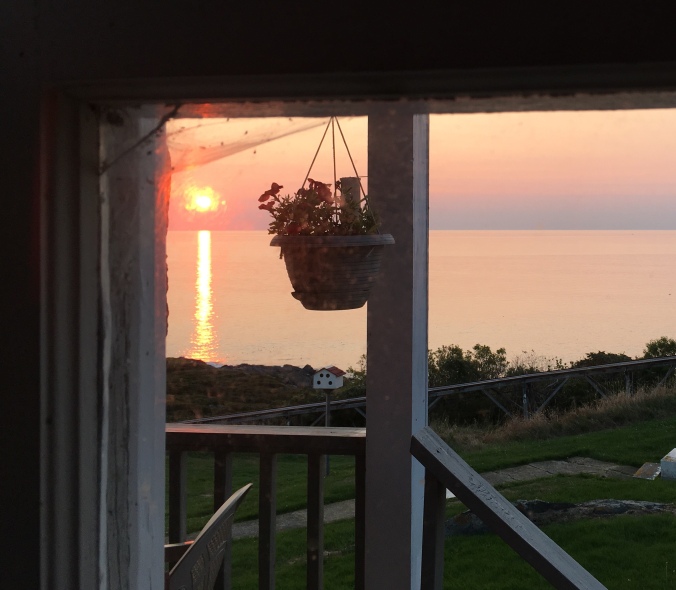 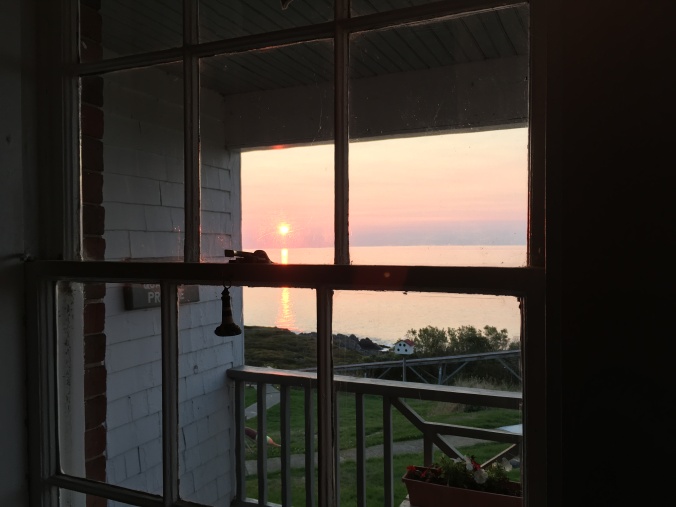 Looks like I have to deep clean some outside cobwebs.

This morning it rose behind the clouds. 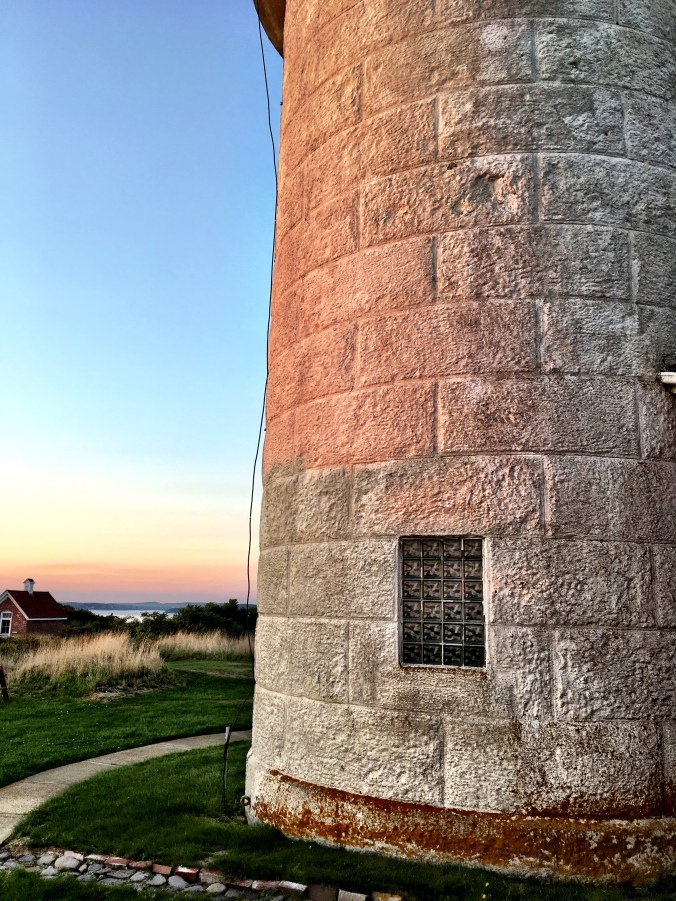 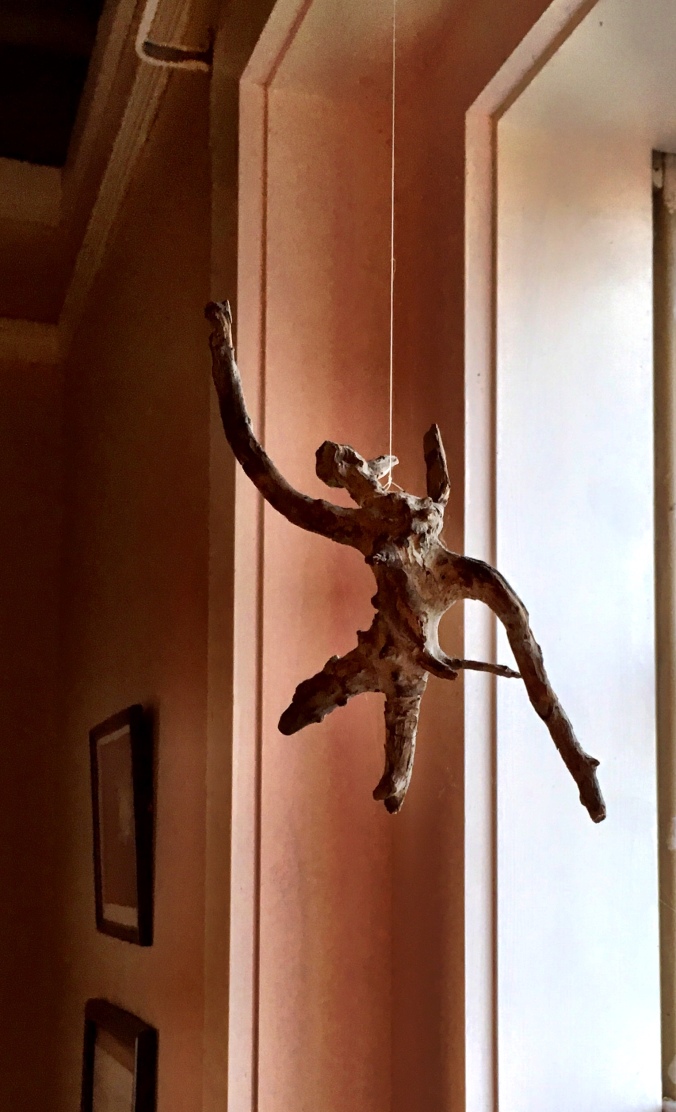 This morning I am literally waiting for the grass to dry so I can hop aboard the Gravely mower and shear the lawn.

Time offshore is coming to an end and it is time to take stock. Let me report that first of all, I had EXACTLY the right amount of q tips. Who knew? Overall our food stores did great, almost nothing left over and no shortages. Going ashore definitely helped. So tomorrow is the big day when I clean the refrigerator. Today I washed the floors with a homemade linoleum solution. It better look good, I added a couple of drops of Argan oil, since I didn’t have baby oil; that stuff is worth its weight in gold. The reality of caretaking: cleaning and moving.

But first we saw the eclipse. My pinhole projector worked pretty well. As predicted, photos did not come out clearly. It was too hard to hold both the box and the camera steady and my attention wandered.   90% shadow looked like a small bite. So I started creating my own sunsets. That was fun. 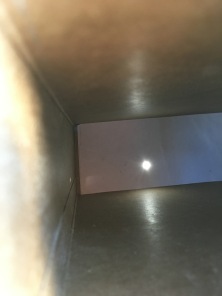 Here is an idea of what it looked like. The shadow moved across the top of the sun.

It was eerie. It became mildly dark, enough where I would have needed a light inside, and the temperature dropped. I did not notice the birds act differently though, probably because it never got completely dark.

This morning’s sunrise in fog was spectacular.

Then the fog burned off and we could see Mount Baker again. 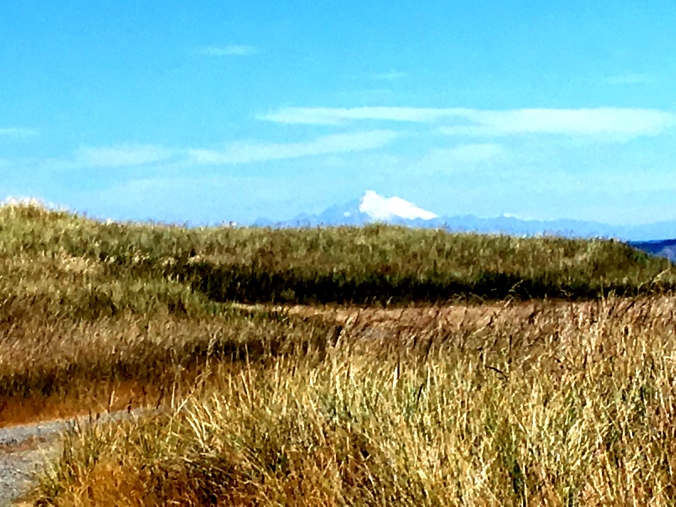 We have been recording twice a day weather observations and it is a good chance to look at the sky. 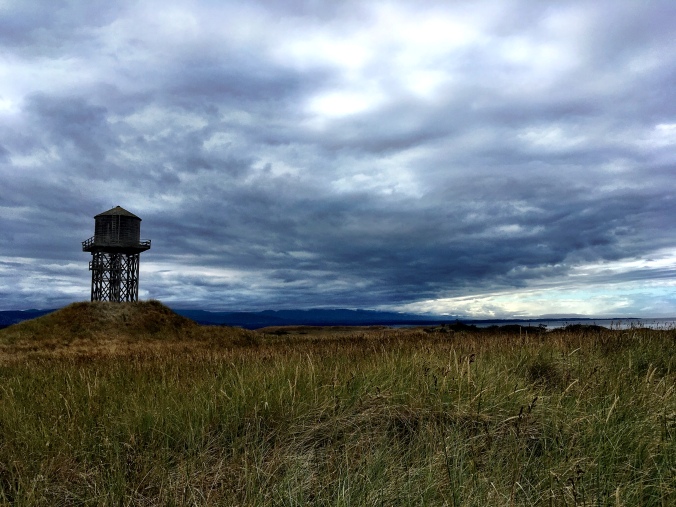 I’ll miss Protection Island’s vistas but look forward to hearing birds sing rather than squawk at home. After I clean the refrigerator.

They always were, the number is just getting smaller. We leave Aug 24, which is just around the corner. Before then we have to figure out how to get our bikes, and Tim’s keyboard to the shipping pick up point. We are sending them home via bike flight, which worked great getting them here.

Until then, I am bonding with the birds, deer, seals and apparently at least one elephant seal that has made its way to the island. Tim went ashore this week for the usual biathalon trip – motor boat, bike 5 miles, swim 1 mile, bike 5 miles (at least 2 downhill) and motor boat back to the island. Instead I stayed and took my usual hour and a half walk. It’s so easy to get exercise when there are no other demands for your time. Must continue this at home.

I usually spend the morning weaving and reading. Then one of us has to clean the dock, do a couple of chores, and then I walk and walk. I highly recommend it. I have been reading books by a few wonderful nature writers, they get it. Solitude and nature is therapeutic. Stopping to watch eagles soar overhead, watching how a sunrise changes in the smoky atmosphere, even watching baby seagulls spread their wings. It’s all good.

I will try to stay off the go, go, go train when I get home. Make time for things I enjoy and don’t waste time on the internet.

These are some of things I saw the past couple of days.

Another smoky sunrise. A front is moving through today and the smoke should clear. Odd that it affected the atmosphere but it did not smell smoky. 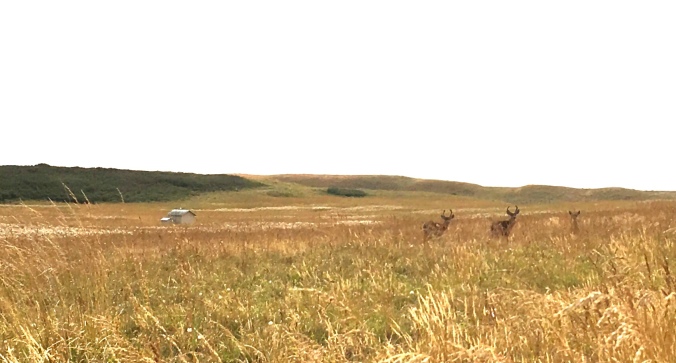 A pair of Larry’s. 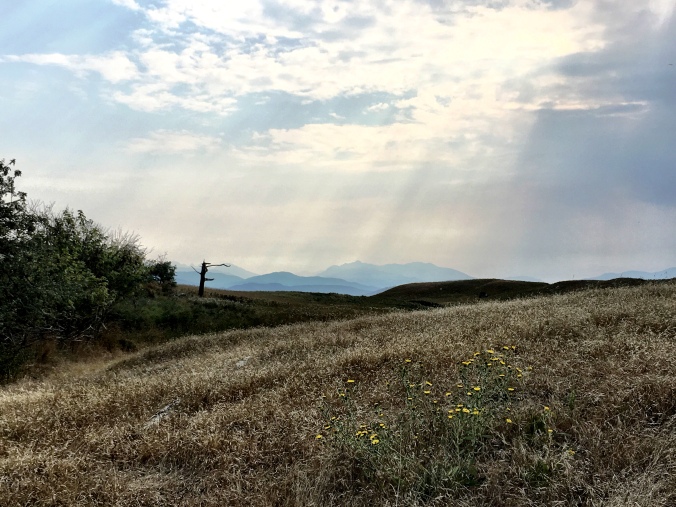 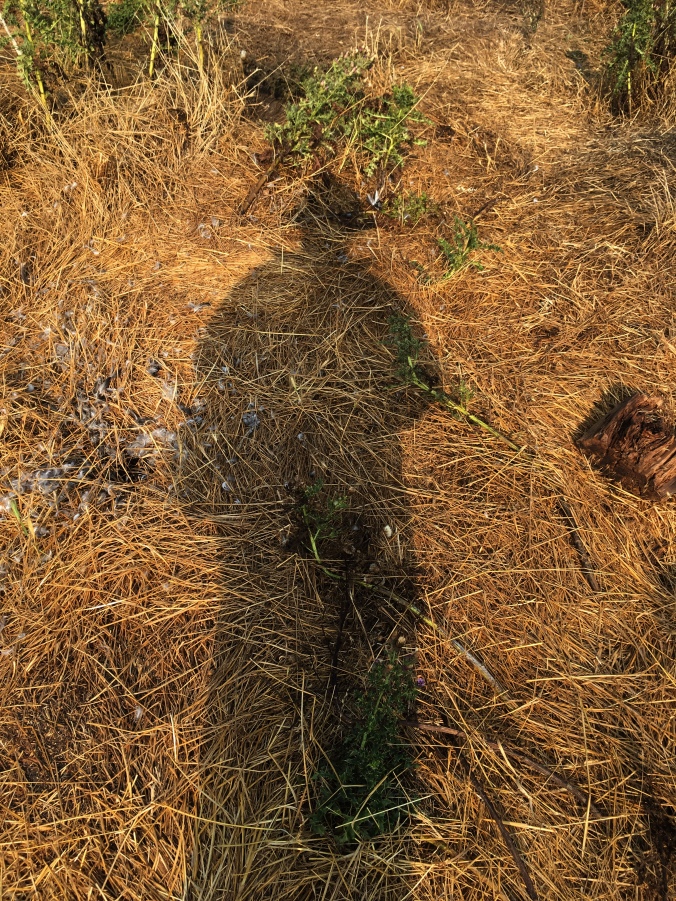 And the new me.

Island life and travel off island requires planning, mostly around tides and weather. The tides are predictable, the weather less so.

Last night was lovely, the moon wasn’t quite full and the cabin looked like a little house on the prairie.

There are certain times, at least once a day, when the tide is too low to leave or enter the marina. It falls lowest when the moon is new or full; somehow the tide table we rely on states it can fall below 0. That means we frequently wake up and leave before 6 am, like this morning. I actually understand tides better now that I they are frequently presented in graph form.

The other piece of information we gather is the weather forecast, issued at least three times a day. Early in the week today’s wind was forecast to be light, then it was going to be a little stronger and when I woke up at 4:20 this morning there was a gale warning. I was crushed.

The wind seemed very calm around the cabin although one of the buoys in the Strait reported steady 20+ mph winds. We had been shadowed by the land to the south all night while the wind blew. I got binoculars and looked at the water I was able to see and it looked pretty calm. Weather point forecasts, confirmed this, so I left. Just as the sun rose. There were some gentle rollers and it was fine. 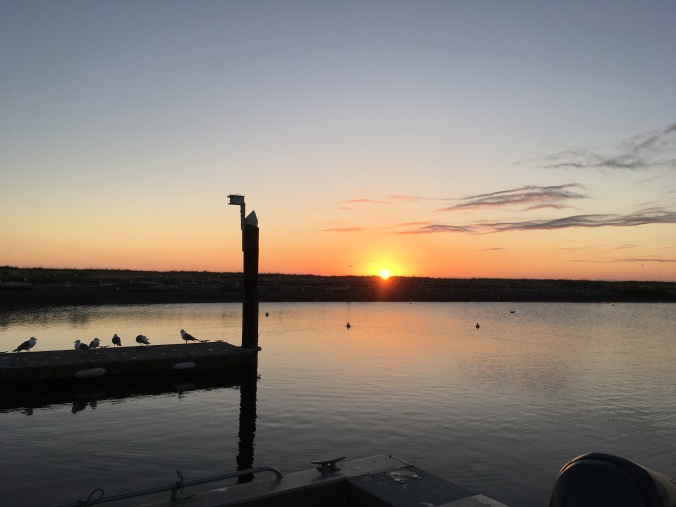 Then the day really began. I walked a couple of miles to get breakfast,

a couple more miles to the post office, where I added so much stuff to my pack I decided to walk another 2 miles (roundtrip) to ship some stuff separately because I was going to tour Seattle. Until I got a text which said my midnight plane was delayed until 0100 and I wouldn’t catch the little plane back to the Adirondacks. After a mere 2 hours on the phone!!!! the problem was worked out. And I should catch the little plane and get home with only

I would love to have an assistant when travel plans hit the dirt. It takes all the fun out of travel. My phone calls were dropped at least 3 times, by the 5th person, I had a chance to look up flights online, when the bus was on the ferry, and after giving 3 pieces of evidence that my flight was actually delayed just kept saying, I want to be on X flight on a different airline. To be truthful, I was ready to just buy that ticket. But my 5th agent got the message, hung in there and made the change, requested a refund from Jetblue and I only had to pay $16 more. You might argue I shouldn’t pay anything, but I’m happy. And I am scheduled to leave 3 hours earlier so although I didn’t get to see Seattle at least I was on the bus to the airport. Home tomorrow by noon.

It was quite a jolt back to the world of schedules, delays, and customer service representatives. My transition from island time has begun. 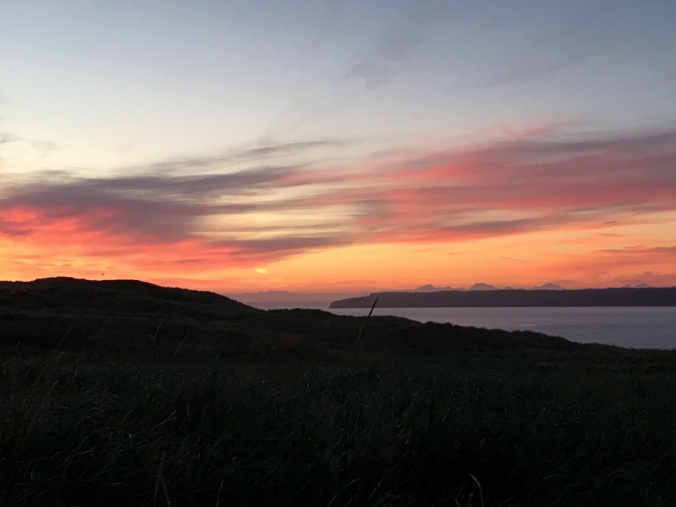 How fitting that the barn swallows left the nest and learned to fly today. Last night they looked like this, packed in tight in the nest and the rafter, singing for their supper.

Today they were on their way to independence. I tried to get shots of the parents making fly-bys with dinner but they didn’t come out too well. The rest of the day they clumsily flew around the porch and rested on the picnic table, floor, and windows. They are still being fed. Pretty soon I’ll be able to reclaim that space for humans, after I fumigate it.

The crows have been expressing a bit too much interest.

Down at the marina, at least one pair of oyster catchers is back. Look at those beaks.

I took the boat around the island and may have seen one elephant seal on the beach. There were several piles of harbor seals on one of the spits and beaches. Separate from them was a humongous, pale large mass on the south beach. Either an elephant seal or a huge log. Time will tell.

I finally got a halfway focused shot of a tufted puffin out on the water. I love their huge orange beak. 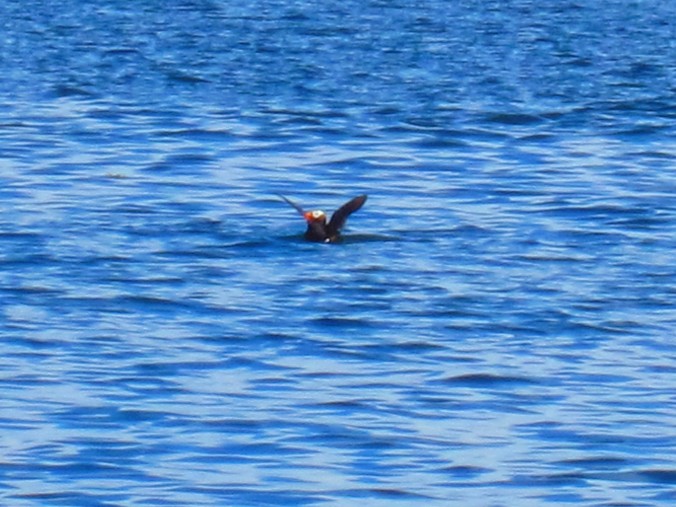 I dissuaded at least one boat from being too close to shore but haven’t got a close look at the two jet skis I have seen cruise away from the island, twice! Cheeky buggers.

All good things must end. Our two week stint is over and it was a great one. We had all sorts of weather, nice visitors and completed lots of projects. It is also starting to get cold in a house  without central heat: 47 degrees f this am as the sun rose.

I donned a hat and gloves (both knit by me of course), and every sweater and jacket I had, and we carried our gear down the hill to meet Capt Ethan with the dinghy. 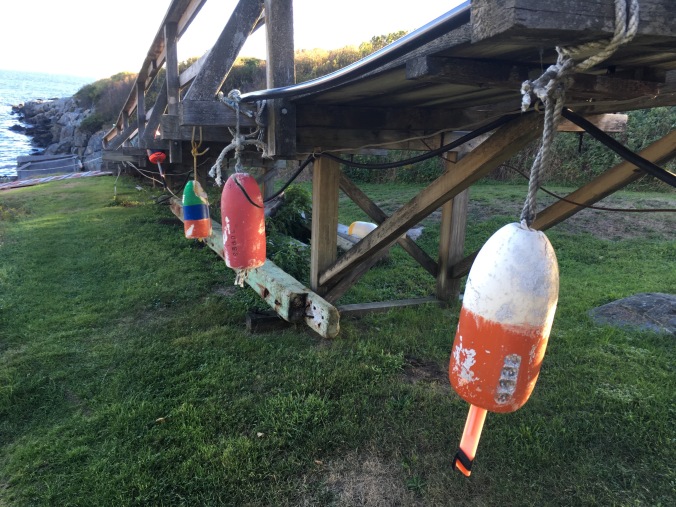 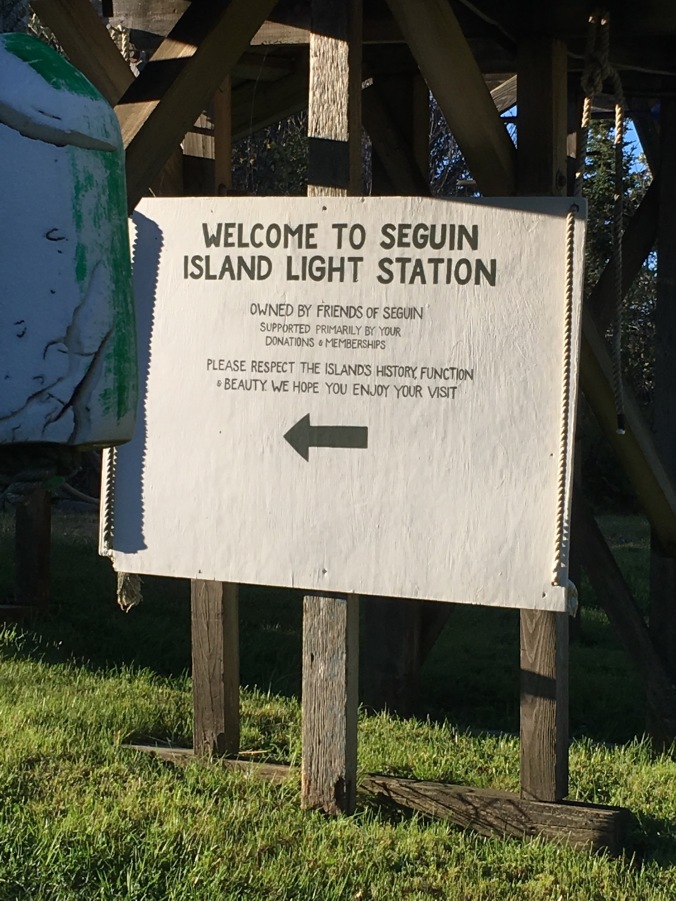 It was seamless trip ashore despite the cold wind and we met up with several friends before we left. I had my first meal out and used a flush toilet. Woohoo.

I write this from the comfort of my own couch, looking forward to our next trip to Seguin.