The snow had been glorious here in Acadia, until the sky dumped a few inches of icy slush on top of it this week.

We got to shovel that mess while it was still raining sleet. With the right protective outerwear, including hand knit wool mohair gloves, I remained dry. Well my hands weren’t dry but they were still warm.

When the snow was still fluffy, we skied the carriage roads here on the Schoodic peninsula and on Mt. Desert Island (referred to as MDI if you don’t want to worry about how to pronounce dessert as dessert here).

Tim whisked me away to Deer Isle for Valentine’s day (I made him another mask, three layers with two layers of cloth sewn around a surgical mask) and we skied and walked in the woods.

I came upon this memorial bench. Apparently George is still kicking but they are prepared to remember him.

We’ve already had three snowfalls at home. We got stuck in one downstate, with cars and tractor trailer abandoned on the side and the middle of the road. It took us two hours to crawl a half mile. Never again. Then to make matters worse, the hotel we found was overbooked (“we have negative rooms”) and there was a convention of 1000 stranded lawyers who ate all the food and drank all the liquor before we got there. So we had raisin bran for dinner and called it a night. But the next day we saw a double rainbow over Newark airport.

Back home, I was able to ski my favorite trails, which Tim had already broken.

I’ve been doing a major house cleaning; a real purge. I was deciding whether to keep my stargazing binoculars. They are Elmer Fudd sized and have to be mounted on a tripod to be of any use. I set them up and could see Slip Mountain clearly off in the distance and spy on the local birds. That night, I couldn’t sleep and was able to observe our two? moons setting behind Cobble Mountain.

I think I’ll keep them.

Cabin fever comes in two forms: the hyper-energy from staying indoors too long; and the flu,  from venturing out in to winter crowds.

We noticed the latter when we went to a concert in Montreal around Christmas. It sounded like a TB ward. Everyone was coughing, sneezing, blowing their noses and unwrapping noisy candy. I shudder to think about it. One thing a moderately isolated life provides is less germs and more health. I’m not exactly a germaphobe – yes, I taught my kids to wash their hands before putting them near their mouths; and yes, I loved the scene from Curb Your Enthusiasm, when Larry David washes his hands to the Happy Birthday song (as recommended by the CDC); and no, I never eat from buffets. OK so perhaps I am a bit of a germaphobe.  I like people, I really do, just not as much during the winter. Despite the flu vaccine, the flu is hitting hard and I just don’t feel like getting it.

So I mostly stay in the cabin or venture outside. I avoid movie theaters, or other venues where a bunch of sick people pack themselves in. I do however, work in a hospital one day a week, so I make up for it the rest of my time.  Yesterday, we went for a lovely cross country ski tour in the woods around the house to prevent the other sort of cabin fever.

Conditions were perfect. The temperature was in the 20’s and the fresh snow was lovely. Of course I fell on my first little downhill but was mostly fine after that. We saw the work of beavers and coyotes.

It looks like they tried to dam this lovely river without success, or perhaps they had in the past.

We often hear coyotes behind the house, especially at night. We found the remains of  one of their dinners in the woods. A well picked deer skeleton and lower jaw.

We capped off the day with a soak in the hot tub when the temperature was about 10 degrees, the air was crisp and the stars were abundant.  You don’t catch cold from being outdoors, you catch germs from being inside.

We’ve been able to enjoy the snow. Monday we cross country skied on the Lower Ausable Lake. The trail is approached through an exclusive summer camp club that allows access on the trails, but not the lake itself. It ended at their private dam.

There is a neighborhood fox. Yesterday we were able to watch it catch breakfast in the field across the street.

Tim is hopeful that it will find our moles, which dig around the house as soon as any dirt is visible, and enjoy them as dinner. We even took down the wind chimes.

Yesterday I went snow shoeing with a local group on the Champlain Area trails and we hiked up South Boquet Mountain. Alas no camera, but the views of Lake Champlain, the High Peaks and the Green Mountains of VT were stupendous.

I’m spinning and knitting like a maniac. So far two sweaters near completion from the fleece. Two to go and warm weather is quickly approaching. 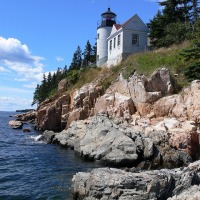