We remain pretty isolated at home. Our location makes it easy.

Except for campfires with 2-4 people, we don’t see anyone. Entertaining at a fire is one of those times it’s best to shower afterwards. Interesting concept.

Even from afar, my grandchildren’s light shines on us. After my cat Elli died, I received the sweetest sympathy card, complete with a paper cat puppet.

And I’ve been featured in show and tell. “O” is for Oma and “Q” is for the Quilt with a lighthouse Oma made.

I am not the most graceful person getting in and out of a dinghy on a rocky Maine beach. In my defense, I was weighted down by a drybag on my back with our electronics. As I was climbing aboard the stern, the boat bucked, and with my legs and arms already in the boat, my butt and drybag landed in the water. It was an impossible position to get out of myself and Tim had to haul me aboard. Another memorable dinghy moment. One year, the dinghy flipped and we had to bob for apples in the cove.

We finished getting the grates up before the island closers arrived.

The departure day was perfect, clear, dry and crisp. The lighthouse was tucked in and would shine all alone for the winter.

We had a short stay on Seguin this year but it delivered plenty of joy. The trails were in great shape and we walked them all.

We dripped in fog for days – not a good time to try to dry newly spun yarn or laundry. A gale came through with winds of 40 mph. We dined out aboard a sailboat and we tucked the island in. The lens sparkled brightly even with its new solar powered LED light.

Friday, our last full day on the island, began with fog, which turned to rain, and ended with double rainbows at sunset. What a treat.

Islands always give more than they take.

The fog has lingered for several days There is a gale blowing now and it should tidy things up a bit. We’re battened down. Such drama. Boats in the cove looked like ghost ships and Pond Island seems to rise out of the mist.

Even though we have been coming here for 12 years, I still discover new things. This old man rock on Cobblestone Beach is a new vision.

A couple of seals have been resting during low tide at the cove.

We went to the workshop, Whistle House last night and once again saw how nice it is to return to the lighthouse at night.

The fog has settled in just as it should at a lighthouse. I woke in the middle of the night and heard it dripping from the Keeper’s building. It’s funny how the dampness obscures some things and amplifies others.

I heard voices which sounded just as if they were on the walkway but instead they were coming from a lobster boat off the island.

The dew makes spider webs more visible and there are plenty of them about.

This view is a little different from just a day ago.

We saw an old friend, Jim, who has spent so much time and energy on this island. He was happy to see what great shape it is in, which is a credit to the Friends of Seguin, the caretakers and their dedicated Wednesday Warriors. We enjoyed an al fresco dinner aboard Finisterre. My journal posts reveal, four years ago, we dined aboard SV Guillemot, which may have been an Outward Bound boat.

Our return to the island showed it in its glory, shining brightly. At least we could see its glow.

You need some fog to get this wonderful umbrella effect.

I am still hopeful we will see a few more sunsets before it is time to go. We will have to actually see the sun for this to happen.

We left the deer at home to finish eating the rest of my garden. They’ll have to pass on the geraniums though. These came from Seguin at the end of a season a few years ago.

Tim suggested we drive through the White Mountains to Maine. Then he took a nap. He woke up for the hairpin turn of the Kancamagus highway.

We enjoyed a leisurely drive and made it to Bath, ME in time for my French zoom class. I am confident Canada will let us back in one day…It was fun to have a little time to roam the town.

As predicted the wind lied down by Thurs and we took our favorite lobsterman’s boat with our gear and food to the island. The new Yeti cooler performed as advertised.

Getting the gear up the hill is always a chore but Cyndy from Friends of Seguin Island helped and it went easier than I remember. Maybe it was a good plan to backpack and build up legs prior to this trip.

And here we are.

This year, through individual contributions, Friends of Seguin Island raised more than $100,000 to convert to solar energy. And it works, even in this foggy spot.

The Island had the same caretakers for the last two seasons, Debbie and Chris, and they kept it in great shape and made several major improvements: a spanking new generator shed for the spanking new generator; a plank walkway in the North trail’s swamp; a new interesting trail and a new bench on it. . Some of this was done last summer, when the electric cable failed and they had to run a generator 4 hours a day. Hats off!

Here’s to a few more beautiful sunsets in my happy place.

We leave for Seguin Island Lighthouse sometime over the next few days. Initial plan was Tues but by late last week, I started to watch the weather and saw strong north winds and high seas in the forecast. It still looks that way until at least late Wednesday.

This is the way it goes. We have been island caretakers for five different islands and they all have their sweet spot. North winds don’t work for Seguin because they create waves onto the rocky beach. We learned that over the years. Our first time here, the skies were blue and crisp, looked beautiful, but it came with a north wind. We waited a week.

Baker’s Island has an exposed beach and a rocky landing. Especially fun with cats. For many reasons, including the fact we don’t currently have any, we no longer travel with cats.

Deal Island, Tasmania, in the Bass Strait, was the roughest. There’s always a west wind and you pound into waves for four hours from the east unless you catch a plane. The boat ride off island has always been lovely.

Protection Island, Washington and Five Finger Lighthouse had tides to contend with. We could only leave on a medium tide in Protection and Alaska had 25 foot tide changes so no boat could anchor nearby, it was a scramble on and off the rocks.

So while I have coffee at home in the Adirondacks, where there has been frost on the ground every morning, I check the weather update and contemplate another wet boat ride. It’s always worth it.

We are getting ready to head to Seguin Island Lighthouse for a couple of weeks. I conscientiously enlisted a Catsitter to watch cute little Elli.

Tim went backpacking for a couple of nights and while he was gone she died unexpectedly. Healthy during the day, dead overnight. Life is like that.

Because it’s so close to our departure, the catsitter has become a housesitter and they are still coming (which means I still have to clean the fridge).

They won’t have to cook for him, whose call is , “who cooks for you”, but I came across this beauty in our backyard. He was hanging out on a branch near an owl house made for a much smaller owl.

I just stood with him quietly in the woods very peacefully.

Fall is in the air. This tree’s color popped out at me.

Colors haven’t changed in the hills yet.

Nor at ye olde homestead with the cutest sheshedbeeshed, which still needs a foundation skirt and interior shelving.

I am starting to see things again. Not woowoo visions but interpreting reality a little differently. It is mostly centered around bees at the moment. On Deal Island, in the past, the rock formations spoke to me.

You have to admit you see a bee flying at you. So the door went up and the shed is finished. My “weekend” project took three months and ran behind schedule and over budget. But it provided hours of learning and much welcomed activity as we moved in and out of PAUSE. I may have a little post construction depression (PCD).

It’s easy to see why because it is the cutest shed I ever built. Tim gave me some bee decor for our 14th wedding anniversary and it is the perfect finishing touch.

Now the bees are sending me their own message. Something about a dog.

My daughter lacked the vision but here it is.

When we sold our last sailboat, Tim thought he was free of boats but I had a vision of dragging a small boat around the Adirondacks and zipping around in its many lakes. Sparky met the bill – small, a little funky, cute as a button, and reliable. She is a 50 year old Starcraft Sprint with her original Mercury 50 outboard. She has already outlasted one truck. Now Eddie takes her for her rides (Eddie because he is an Eddie Bauer Ford Explorer, 33 years her junior).

If anyone can replace a windshield on Sparky, please let me know.

She has been in at least 10 lakes with us. Yesterday we ventured to northern Lake George from Rogers Rock campground. It was a perfect day, warm, sunny and not crowded except for two loons that got a little close.

We dropped anchor off Vicars Island and Tim swam his usual mile, I did a little less and while I procrastinated getting in the water, they swam close and started singing. What a treat.

I swam for a bit then clambered back aboard (actually the hardest part of the swim because the ladder leans into the V- hull), and lounged on the pull out seat.

We wrapped it (and perhaps summer) up with soft serve ice cream. Just what I dreamed. 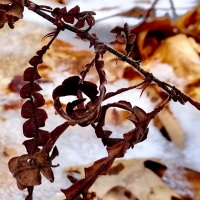