We had a number of people visit from boats anchored in the cove closest to our house.

I was doubtful a barbecue would take place because the wind was “fresh”. The sky was the clearest it has been and the weather was mild, it was 100f in Melbourne during the day. But the party happened and we went down to the cove. While we were looking at the stars, we saw a satellite pass overhead. We have seen the Southern Cross and the Milky Way but Tim mentioned that there were clouds in the same place over a couple of nights. They looked like another galaxy. It turns out they are. We saw the clouds of Magellen, which are galaxies orbiting our galaxy. The mind boggles. 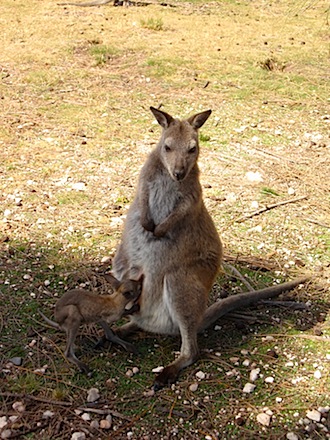 Then today, when I left the compound to walk to Winter Cove, I saw the smallest wallaby Joey yet. it was tiny and gangly. I watched for a while but needed to pass and it clambered into its pouch. At Winter Cove, I found a small skull, seagull or tern is my best guess. The day went from seeing objects at the limit of the naked eye’s visibility to small creatures along the tracks

We’ve become Wallaby wranglers and we are getting pretty good at it. We had about four wallabies in the outer circle of gates and over a few days, we managed to get all but two out. 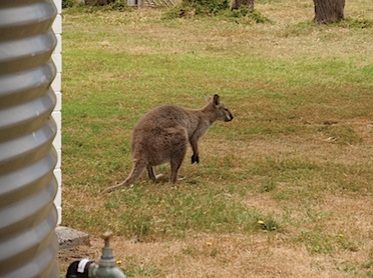 Then, I went to get drinking water and found one in the inner compound, right next to the house. They chew on the grass, which is good, but leave wallaby poop around, which isn’t so good. We used some amazing teamwork and got it out the front gate.

It was a beautiful day to take a walk and I went to Winter Cove, about 4 kms from house. The only problem was these new little flies have arrived. They don’t bite or anything but are “in your face”.

I got to the beach and saw the catamaran anchored nicely and found a small bird skull. 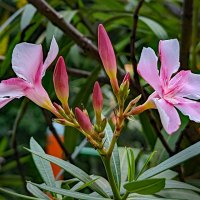