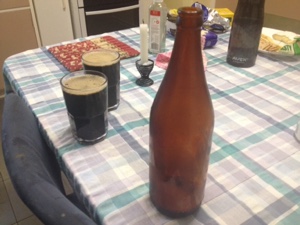 It’s time. My batch of stout has fermented and carbonated so we cracked one open last night. It’s no match for Guinness but it was good. It had a little foamy head and a pretty good taste. I think something other than white sugar might have given it more of a caramel flavor.

We had a day and a half of isolation but now we’re full again. A group of seven working bees from Friends of Deal Island are here for a couple of weeks. Their main goal will be to continue to eradicate invasive plants.

We brought the Ute and trailer down to the jetty to haul their gear and food up the hill. We had to scatter a gaggle of Cape Barren Geese on the way down. 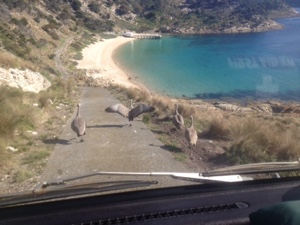 While we waited on the beach for our visitors to arrive, I encountered this dog face rock on the beach.

And a couple of wallabies drinking from a tidal pool. 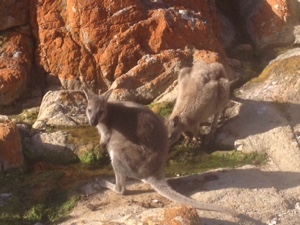 A lovely yawl anchored in East Cove after at least 30 minutes of trying, and a group of sea kayakers, associated with the Westminster School in Adelaide, came ashore as we were heading up the hill. Company!
We have heard not too many people on the mainland are aware there are islands, some even inhabited by more than two caretakers, in the Bass Strait. This group was asked if they would sleep in their kayaks at night!

One thought on “My stout is stout”