It’s hard to believe it ‘s Spring in the Adirondacks. We have two feet of snow on the ground and the temperature was three degrees f today.

But the sun is stronger, the days are longer and I have heard a few new bird songs.

My gift to me is a fair isle vest, knit with three commercial yarns and three handspun skeins (one skein was dyed from all the onion skins we collected during our three month idyll at Deal Island Lighthouse, Tasmania). 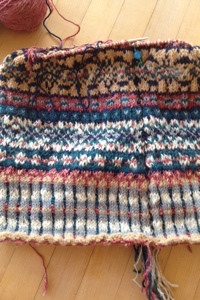 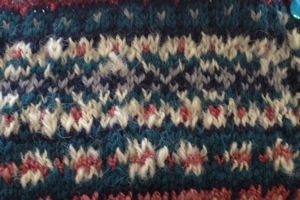 My cleaning and organizing obsessions continue. This time in the spice rack. Last fall, I hung several bunches of herbs and peppers to dry and it was time to put them to use. One big mistake I made was not labeling them in the fall when they looked like the actual plant and not dry , shriveled weeds. I could confirm sage but the rest were more subtle. One I made into a tea to sample and am calling it Lemon. Perhaps it was lemon balm or lemon basil but Lemon it is. I’ve called two unidentifiable bunches parsley. One may have been parsley and the other possibly cilantro. Who can tell?

Once the herbs were store in jars, They needed to be easier to find. I keep my spices in two baskets: one with sweet spices for baking; and the other with savory spices for cooking. I could never tell from the top what was in each of the jars. So I decided I needed to label the tops. I was able to use a permanent marker for the later tops and opted for nail polish for the black tops.

The nail polish did not work so well so I had to get creative with the names. Chili powder became “Hot”, Rosemary became the picture of a rose, garam masala is GAR M. I hope I remember my creative code.

Snow is great and the private ski area right next door was open on Sunday so we threw our skis on our shoulders and walked next door to go skiing. Just pinch me. I had to relearn how to use a rope toe, a very fast rope toe. I brought old leather lined mittens for the task but they weren’t strong enough. I had to trade them in for a pair of industrial cowhide gloves which worked beautifully
. 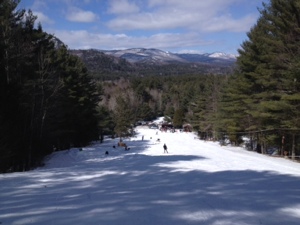 One thought on “Spring things”