We hiked to the summit of Strzelecki Mountain yesterday.  You will have to take my word for it because I took a camera whose cable link is already packed and unavailable.  So I will post those pictures out of context.  Here’s the Tasmanian Parks and Wildlife trail guide.

Our view was to the west until we circled around the back of the mountain.  Plus we could watch our car slowly disappear as we ascended from the trail head.  Elevation gain,  726 m over 3 km to the summit.  I almost resisted making the final ascent because the views were already spectacular where I was, but I made it.  Along the way, we saw a blue tongue lizard and heard lots of birds.  We didn’t see any snakes, which is fine with me.

After the hike, we visited Trouser point and the beautiful, half moon beaches with lichen covered rocks.  The rock formations were extensive and flat, which made a nice shelf along the water.

We are awakened here by the song of the laughing kookaburra. A pair of superb fairy wrens peck on the window when we are drinking our coffee.  Black swans are an uncommon, common site for us.  Blue winged parrots fly by our window.  The Australian magpies are all over the roads eating carrion and have a haunting, throaty call.  There is a flock of turkeys behind the cabin which get their panties in a bunch when cars go by. 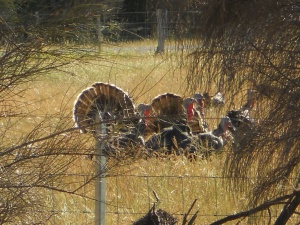 We’ve also seen a flock of Cape Barren geese during our travels around the island.  They have a distinctive green bump “cere” on their beaks. 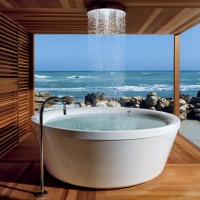