The rusting remains of heavy equipment always surprises me in the woods.  I think this is more of an oxidative process than natural decay.  We’ve seen snow cats, wash machines, cars, trucks in various stages of decay. Acid rain accelerates the rusting and decay process.  Maybe these rusting implements can become a marker for acid rain levels just like the lakes and sea birds.

We snowshoed Hoffman Notch from Loch Mueller in cement like snow.

There were still ice walls and frozen streams, which was lucky since we seemed to cross streams every five minutes or so.  I was really impressed by how long it took us to drive from one end of the trail to the other.  We covered a lot of ground.

I was on the road, by car, snowshoe and skis a lot last week.  I took a trip to Long Island and watched Lost with Cooper, Liz and her family.  I guess I could add sideways time travel to my events last week.

I was surprised to be able to watch TV at the gas pump!!

What could have possibly generated the need for this?  Running out to get gas in the middle of your favorite show?  Don’t want to miss the show from the in-car entertainment system since the engine is off to pump gas?  Next there will be TV sets along the trails.  It’s bad enough they are in restaurants, doctor offices.  There’s no getting away from it.  However, it’s become so expensive, maybe I’ll go to the gas station to watch Lost next week.

Next I went to winter camp with Kristi.  We went dog sledding, sort of.  There wasn’t any snow but the dogs still enjoyed pulling the sled around.  I learned how to make a foolproof fire starter with cotton balls and vaseline. It even lights in the rain.  We avoided burning the camp down though.  It had been predicted to rain all weekend but we lucked out.  Yesterday, we went to NH and went backcountry skiing.  It was raining when we started but turned to snow as we ascended. That was good because it cushioned all the falls and the way back.

Of course my camera battery died the day I got there so all I have to show for it is my badge.  Badges! We don’t need no stinking badges!! 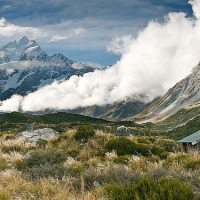 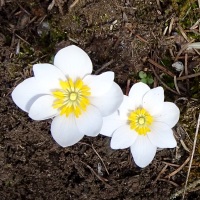